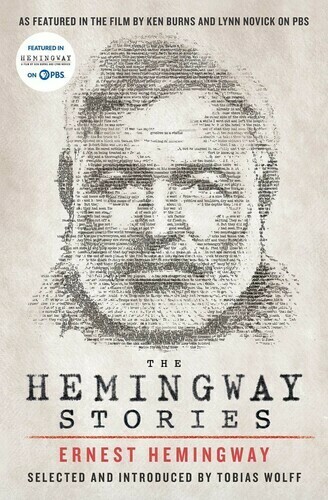 A new collection showcasing the best of Ernest Hemingway’s short stories including his well-known classics, as featured in the magnificent three-part, six-hour PBS documentary by Ken Burns and Lynn Novick—introduced by award-winning author Tobias Wolff.

Ernest Hemingway, a literary icon and considered one of the greatest American writers of all time, is the subject of a major documentary by award-winning filmmakers Ken Burns and Lynn Novick. This intimate portrait of Hemingway—who brilliantly captured the complexities of the human condition in spare and profound prose, and whose work remains deeply influential in literature and culture—interweaves a close study of biographical events with excerpts from his work.

The Hemingway Stories features Hemingway’s most significant short stories in chronological order, so viewers of the film as well as fans old and new can follow the trajectory of his impressive life and career. Hemingway’s beloved classics, such as “The Short and Happy Life of Francis Macomber,” “Up in Michigan,” “Indian Camp,” and “The Snows of Kilimanjaro,” are accompanied by fresh insights from renowned writers around the world—Mario Vargas Llosa, Edna O’Brien, Abraham Verghese, Tim O’Brien, and Mary Karr. Tobias Wolff's introduction adds a new perspective to Hemingway’s work, and Wolff has selected additional stories that demonstrate Hemingway’s talent and range.

The power of the Ernest Hemingway’s revolutionary style is perhaps most striking in his short stories, and here readers can encounter the tales that created the legend: stories of men and women in love and in war and on the hunt, stories of a lost generation born into a fractured time. This collection is a perfect introduction for a new generation of Hemingway readers and a vital volume for any fan.

Ernest Hemingway did more to influence the style of English prose than any other writer of his time. Publication of The Sun Also Rises and A Farewell to Arms immediately established him as one of the greatest literary lights of the 20th century. His classic novella The Old Man and the Sea won the Pulitzer Prize in 1953. Hemingway was awarded the Nobel Prize for Literature in 1954. He died in 1961.