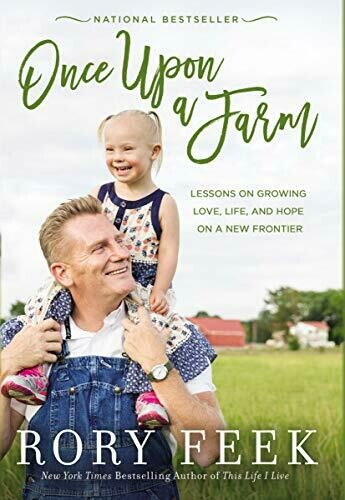 Feek, Rory- Once Upon a Farm

Sometimes it’s not only what we plant but where we’re planted.

Now raising their four-year-old daughter, Indiana, alone, after Joey’s passing, Rory Feek digs deeper into the soil of his life and the unusual choices he and his wife, Joey, made together and the ones he’s making now to lead his family into the future.

When Rory Feek and his older daughters moved into a run-down farmhouse almost twenty years ago, he had no idea of the almost fairy-tale love story that was going to unfold on that small piece of Tennessee land . . . and the lessons he and his family would learn along the way.

Now two years after Joey’s passing, as Rory takes their four-year-old daughter Indiana’s hand and walks forward into an unknown future, he takes readers on his incredible journey from heartbreak to hope and, ultimately, the kind of healing that comes only through faith.

A raw and vulnerable look deeper into Rory’s heart, Once Upon a Farm is filled with powerful stories of love, life, and hope and the insights that one extraordinary, ordinary man in bib overalls has gleamed along the way.

As opposed to homesteading, this is instead a book on lifesteading as Rory learns to cultivate faith, love, and fatherhood on a small farm while doing everything, at times, but farming. With frequent stories of his and Joey’s years together, and how those guide his life today, Rory unpacks just what it means to be open to new experiences.

“This isn’t a how-to book; it’s more of a how we, or more accurately, how He, God, planted us on a few acres of land and grew something bigger than Joey or I could have ever imagined.”

Rory Feek is a true renaissance man, known as one of Nashville’s premiere songwriters, entrepreneurs, and out-of-the-box thinkers. He is a world-class storyteller, crossing all creative mediums, from music and film to books and digital media, and is the New York Times bestselling author of This Life I Live and author of Once Upon a Farm and The Cow Said Neigh. As a blogger, Rory shares his heart and story with the world through roryfeek.com and has more than 2 million Facebook followers. As a songwriter, Rory has written multiple number-one songs. As an artist, he is half of the Grammy-winning country music duo Joey+Rory. As a filmmaker, Rory wrote and filmed the touching documentary To Joey, with Love and directed the feature-length love story Finding Josephine. Rory has appeared on The Rachael Ray Show, CBS Sunday Morning, and The Today Show. As a storyteller, Rory has a new role as Chief Creative Officer of the television network RFD-TV, where he will continue to share not only his own story with the world but also the incredible stories of many others. RFD-TV originally aired the television variety show The Joey+Rory Show and will also air Rory’s most recent television series, This Life I Live. Rory and his youngest daughter, Indiana, live an hour south of Nashville in an 1870s farmhouse, where she goes to school in a one-room schoolhouse built for their community.