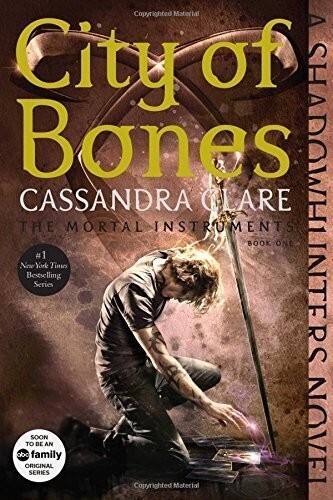 Discover the world of the Shadowhunters in the first installment of the internationally bestselling Mortal Instruments series and “prepare to be hooked” (Entertainment Weekly)—now with a gorgeous new cover, a map, a new foreword, and exclusive bonus content! City of Bones is a Shadowhunters novel.

When fifteen-year-old Clary Fray heads out to the Pandemonium Club in New York City, she hardly expects to witness a murder—much less a murder committed by three teenagers covered with strange tattoos and brandishing bizarre weapons. And she’s more than a little startled when the body disappears into thin air. Soon Clary is introduced to the world of the Shadowhunters, a secret cadre of warriors dedicated to driving demons out of our world and back to their own. And Clary is introduced with a vengeance, when her mother disappears and Clary herself is almost killed by a grotesque monster. How could a mere human survive such an attack and kill a demon? The Shadowhunters would like to know…

Cassandra Clare is the author of the #1 New York Times and USA TODAY bestselling Lady Midnight, as well as the internationally bestselling Mortal Instruments series and Infernal Devices trilogy. She is the coauthor of The Bane Chronicles with Sarah Rees Brennan and Maureen Johnson and Tales from the Shadowhunter Academy with Sarah Rees Brennan, Maureen Johnson, and Robin Wasserman, as well as The Shadowhunter’s Codex, which she cowrote with her husband, Joshua Lewis. Her books have more than 50 million copies in print worldwide and have been translated into more than thirty-five languages, a feature film, and a TV show, Shadowhunters, currently airing on Freeform. Cassandra lives in western Massachusetts. Visit her at CassandraClare.com. Learn more about the world of the Shadowhunters at Shadowhunters.com.