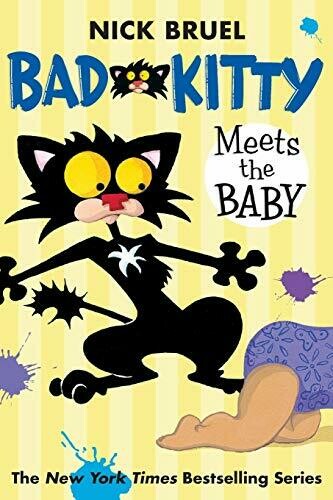 Kitty's owners are home with a big surprise for Kitty. But what is it? Kitty, reeling in horror, thinks it's a . . . dog. The neighbor cats are convinced it's a cat. But we all know that it's really a BABY!

With Nick Bruel's trademark mix of antic humor (this time involving a Kitty game show and the Kitty Olympics―which the baby wins hands down), riotous illustrations, total mayhem, and Uncle Murray Fun Facts, this may be the funniest Kitty book yet, and the one that hits closest to home.

Bad Kitty Meets the Baby is the winner of the 2012 Children's Choice Book Awards for Third to Fourth Grade Book of the Year.

Nick Bruel is the author and illustrator of the phenomenally successful Bad Kitty series including the 2012 and 2013 CBC Childrens Choice Book Award winners Bad Kitty Meets the Baby and Bad Kitty for President. Nick has also written and illustrated popular picture books including Who Is Melvin Bubble? and Bob and Otto. Nick lives with his wife and daughter in Westchester, New York.